Patch holes in your boat or bail it out with a bucket. Outlast other players and return with treasure to become a Legend.

The goal of the game is to collect the most Treasure while you are alive and turn it in at Ports for Victory Points. Become the most legendary treasure hunter despite your leaky little boat.

Ports are the only place that a player can turn in for their Treasure for Victory Points. If a player dies without turning in a Treasure it does not count.

At a Port players drain all water inside their boat(not Hull damage) and receive 1 free Salvage Card.

Ports are spaced apart by number of turns, with the first one reached after 5 turns. Each next Port being 1 turn further away(5, 6, 7, 8…)

If a player has 10 Water Tokens in their boat, they have drowned and are no longer in the game.

Any cards in their hand are then available for other players to pick up at the cost of discarding 1 of their own.

When a Wave strikes the boat the Wave Strength goes up against a Hull Card.

The Hull Card takes damage counters for Wave Strength lower than its value.

Wave Strength higher than a Hull Card allows water to leak into the the boat equal to the difference.

Water Leaking into the boat on the current turn is "pending" and can be removed by a new Hull Card or Bucket Card during the Action Phase.

The player choosing to Ram rolls to red and blue d6 same as a Wave to determine where they hit the opposing player.

Only Hull Cards are damaged during a Ram, no water is leaked.

Players can never have more than 3 cards in their inventory. If a player draws a Salvage card while already having 3 they can choose which of the 4 cards to dump into the ocean. Can be collected by other players by same rules as for collecting hand cards from drowned players.

There is 1 Krakken card in the Salvage deck. When it is drawn the next Port instantly becomes 1 turn further away.

Each Player gets a

2 Salvage Cards that are NOT Treasure 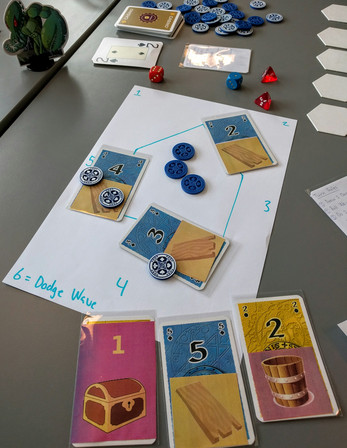